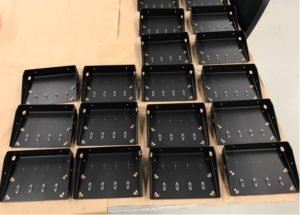 Via our in-house testing capabilities such as flammability testing, and our in-house software capabilities including FEMAP, SolidWorks, AutoCAD, FMEA, etc, your custom kits and parts for your aircraft modification process can be approved quickly for FAA STC as required.

Our manufacturing facilities offer many FAA approval solutions under our ODA including PMA, PC and prepositioning.

Contact us to learn more about our custom component options.

As a testament to the combined value Delta offers, a major connectivity OEM acquired services from Delta for the certification of an experimental prototype radome. The radome was planned to have a lower profile than the standard radomes used at that time, aiming for the prototype to be unique compared to other competitors in the industry. Delta worked closely with the customer, associated vendors and the FAA on this project to ensure all FAA regulations were met, operator needs were satisfied and the customer’s requirements for finer details sated. Ultimately, Delta assisted the customer in bringing their product to FAA certification and production level status, and the product is now a commercial aviation staple in the marketplace.

Have a similar project needing prototype, test, manufacture or installation? Contact us.

Do You Have A Project We Can Help With?

Get a free quote

Delta has been involved in a range of other projects, including: